Your Temperance Temperature in 1790

Can you measure your moral and physical health by reviewing what you imbibe? At least one eighteenth-century doctor thought so.

In 1790 Dr. Benjamin Rush, Founding Father, Surgeon General for the Continental Army during the Revolution, and later professor at the University of Pennsylvania, published An Inquiry into the Effects of Spirituous Liquors on the Human Body and the Mind. He included this thermometer to help his readers gauge their level of health through their drinking habits. Cider comes in midway up the temperance side of the thermometer, too low to engender happiness but high enough to cause cheerfulness.

For more Temperance art, check out this 1838 temperance map which suggested that cider was a gateway drink to harder beverages.

You know the thought you get when you visit a cidery, winery, or brewery, the one that says it would be so much fun to do that. You make a little at home already. How difficult could it be to just scale everything up a couple of thousand gallons. “Pshaw,” you say, “It’ll be easy!”

Cidermaking, like everything from circus performing to street sweeping, is a lot harder than it looks. While it’s easy to jump right into a little home hobby production, scaling that up to a sustainable business model takes a lot more than a good forward-spring. Fortunately the Penn State Extension offers lots of help. Last week they hosted an Introduction to Hard Cider Production workshop.

The workshop covered everything from budgeting to making to marketing. While nothing was covered in depth, every discussion was informative and candid. The talks included:

Assessment of Cider Market Potential in the Eastern U.S.

“Apple Entrepreneurship” & Long-term Prospects for Hard Ciders in the U.S.

I learned something in every session, for instance:

The workshop highlighted a few areas I’m particularly weak in and need to develop, including my appreciation of orcharding and its influence on cider, my understanding of the business of cidermaking, and my tasting sensitivity and vocabulary.

For instance, you’ll notice the glasses are full, but the page is empty.

The single-varietal cyders were racked into secondary earlier this week. Even this early in their development there’s a pleasant sharpness to them both. 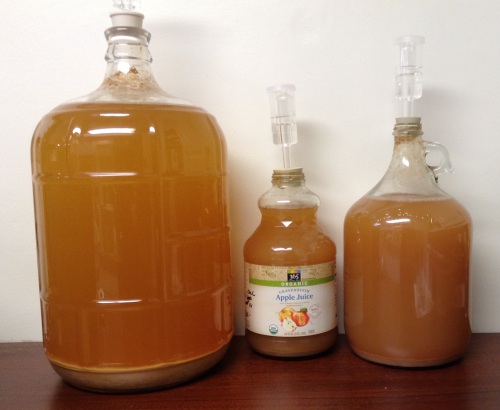 I’m as eager for these to finish as I was with any of my previous cyders, but I notice a difference with these. They’re both pretty straightforward juices with no added sugars or other ingredients (though one does have pitched yeast). Because they’re so simple, I’m feeling kind of lazy.

If only this is what lazy usually got me.

Mystery of the Foggy Bottom Solved

The foggy bottom has finally been cleared up. You might remember that one of the 2014 cysers (using Trader Joe’s juice, honey, and ale yeast) developed a viscous layer of goo during secondary.

It’s called pectic gel, and it’s an extreme form of pectic haze. Pectic gel occurs at the end of fermentation (it requires alcohol) in juice with a lot of pectin in it. Trader Joe’s juice has lots of pectin and that explains why it happened in secondary.

The solution came from Claude Jolicoeur’s The New Cider Maker’s Handbook. He also said there’s nothing to be done when it happens. You just have to rack the clear cider off the gel, but then you can use the gel in the kitchen. I wonder if it would make a good bread spread?