After a false start and several months of fermentation, we finally bottled the Trader Joe’s cyser (using clover honey and Nottingham ale yeast) this past Saturday. We got five bottles out of it. 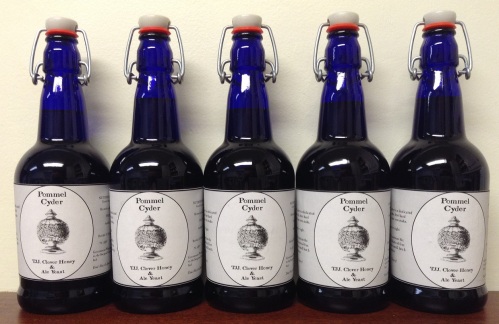 If the hydrometer readings taken before fermentation and again before bottling are to be believed, the cyser is at about 8 – 9% ABV.

Normally we get six bottles out of a gallon jug, but we lost a little juice to this foggy bottom which showed up during secondary fermentation.

Once we got everything bottled we could see the stuff at the bottom of the jug. The fogginess was caused by this viscous goo (a professional term), which resembled honey, but definitely wasn’t.

I took a little taste. It was unpleasant.

I wonder if this was caused by the Trader Joe’s honey? The honey I’ve used before didn’t turn into a gloppy (another pro term) mess like this. It may be in the way they treated their honey. Next time, and there will be a next cyser, I’ll use raw honey.

During my rambles through various cider and homebrew sites, I came across several recommendations for bottling wands. For $2.50 I figured it was worth a try. It doesn’t require any special equipment. You just attach it to the end of your siphon hose, put the spring loaded tip into the bottle, and press it down. The valve opens and fills the bottle.

The bottling wand made bottling everything much easier, faster, and cleaner. Which is great. However, they also make bottling with a siphon a two-person job – one to pump the siphon and one to press down the wand to allow the cider to flow. This isn’t a drawback, just a fact.

Guess I Spoke Too Soon

At the end of yesterday’s post I said the honey wheat cider hadn’t started fermenting very much. Turns out everything, except my patience level, was just fine. As you can see, it’s fermenting just fine now

Using the finger loop as a point of reference, you can see how the krausen (the foamy bubbles) grows over time. From l-r: the cider at 48 hours – at 60 hours – at 72 hours.

Historically, the krausen was referred to as the scum or crust.

Over the last few weeks the winemaker from Blackledge Winery and I have occasionally chatted about our various projects. During one of those conversations he mentioned that he exposes his juice to the open air during the first few days of fermentation to encourage yeast growth. Until he said that, I thought you were supposed to prevent air from coming into contact with the juice. Now I had to check the sources to see what they said.

Somehow I missed that most pre-twentieth-century cider writers recommended starting fermentation in open vessels. Since I had always put my batches in jugs with airlocks right from the start, I wanted to try not doing that.

While I was going back through the sources I came across this unusual cider receipt from John Nott’s The Cooks and Confectioners Dictionary; or, The Accomplish’d Housewifes Companion (1723):

It’s unusual because it uses honey and wheat flour instead of the more usual raisins and sugar. That got me to wonder how that tasted, which got me to want to make it (this is also the basis for all my cider making projects). Happily, I already had raw honey and I was fortunate to get some fresh-pressed juice.

I mixed up a paste of two tablespoons of honey and one tablespoon of unbleached wheat flour, warmed the paste in a bowl set in hot water, and mixed in some raw juice. Then I poured the mixture and cider yeast into the jug.

I added yeast because the juice had been sulfited and there wasn’t enough wild yeast for fermentation.

Once everything was mixed in the jug I covered it with cheese cloth to allow oxygen in and carbonic gas out.

Nott is specific about his process. He suggests letting the cider and paste ferment for a week and then either rack it off into a storage vessel or bottle it. I’m not doing either. Mine is going to ferment for a couple more days before I put an airlock on. After that I’ll let it finish its primary fermentation for three or four weeks, when I’ll rack it into secondary and let it condition until I bottle it later this summer.

Why am I not following his instructions? Partly it’s because Nott’s process involves a lot more effort than I have time for (who wants to open every bottle every day for “some time”?) and partly because I’m not at the point where I’m ready to faithfully recreate every receipt. At least not yet.

The next time I make Nott’s cider I hope to have unsulfited juice so I can let the natural yeasts have at it. When that happens, I’ll follow his instructions more closely.

After fermenting for about 36 hours the fermentation seems minimal. At the very least it’s not very frothy, but it is dropping lees and clearing up pretty well, as you can see: 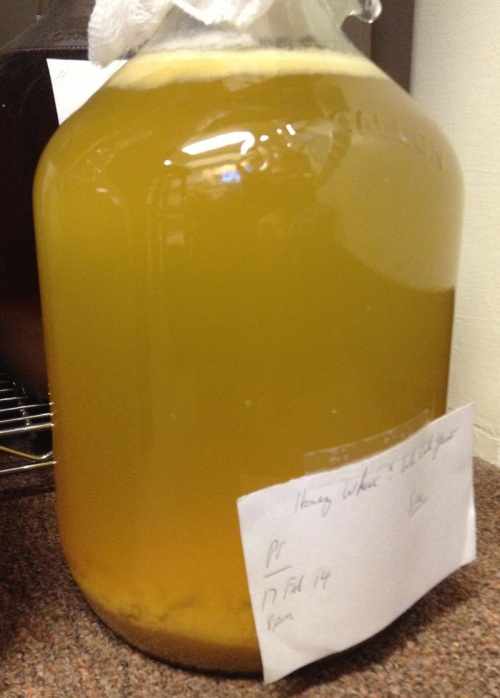 I don’t know if the fermentation is slow because of the honey flour paste or because the temperature is several degrees below the yeast’s optimal temp, or what. Slow or not though, it does seem to be fermenting, which is the goal.

How Much Cider Is That?

How much cider did an early American family make or drink annually? Seems like it should be an easy question to answer, but it’s not. Those early Americans didn’t often record detailed accountings of their cider production and consumption. Instead we have to dig into what they did say to find our answers (or at least more informed questions).

Alcohol, including cider, was usually listed by vessel type, not gallons. You’ll find casks, kegs, cags, barrels, tierces, hogsheads, and pipes of cider in the records.  According to The American Instructor (1770) some of these vessels represent a standardized amount(1):

While this focused on measures for wine and beer, the second Note (printed above the Beer Measure) is important for the cider researcher. It says that wine measurements were used for ALL liquids except beer and ale. Which suggests that a tierce of cider was 42 gallons, a hogshead was 63 gallons, and a pipe was 126 gallons.

Of course this implies a consistency that never was. Even if the words remain the same, weights and measures change with the time, place, and contents. For example, in Pennsylvania (the only state I looked up so far) there’s an 1823 state law establishing a hogshead of cider as 110 gallons.(2) However, in Carlisle, PA in 1832 hogsheads of whiskey were said to contain 75 gallons.(3) It seems the American Instructor’s liquid measure table is merely a suggestion.

The page raises other questions: If cider is treated as wine, does that mean there is no set measurement for a barrel of cider, like there is for a barrel of beer? Are casks, kegs, and cags really only generic descriptions for storage vessels? Which “gallon” was The Instructor using? And why couldn’t they have just written everything down for us?

2. Acts of the General Assembly of the Commonwealth of Pennsylvania (Harrisburg, PA: William Greer, 1823), 10.

Find Hard Cider Near You

Finding information about American ciders isn’t always easy. Just ask J how much time I spend online looking. Fortunately there’s the Cyder Market, whose goal is “to be the one-stop marketplace for citizens of drinking age for all the cyder/cider information and products available in the USA.”

My favorite part of their site is their domestic cider finder, which is a state-by-state listing of licensed cideries and cider-producing wineries. And yes, it’s pretty up-to-date.

So if you’re looking to explore real cider near you, here’s your guide.

On Thursday past I racked off the four test batches of perry I started a month ago. They began like this:

After fermenting for a month they look like this:

As usual, there was a quick tasting to see where things were. Never having made perry until now and only ever having real perry once or twice, I don’t have much to go on. Like so many test batches before, I was just hoping they were potable at this stage (after bottling my baseline will be that they don’t suck. I have such high standards).

So, you ask, how are they? Well the answer is dependent on the juice (and the drinker, but that’s not important right now). The unfiltered Knudsen batches were dry with a hint of pear. The filtered Gerber juices fermented thin and bland. It’ll be interesting to see how they change between now and when they’re bottled.

These will now wait for six months to bulk condition before they’re bottled. From the few perry-making sources I’ve found it seems perry tends to be bulk aged a little longer than cider to allow the warmth of the late spring/early summer to help soften the tartness.

With these four racked off everything at the cydery is sitting in secondary fermentation, which means there’s nothing else to be done for a while. Now I can turn my attention to some of the research I’ve been collecting. Or I could start another test batch. There’s no room for another gallon in the kitchen, but the downstairs bathroom is wide open…